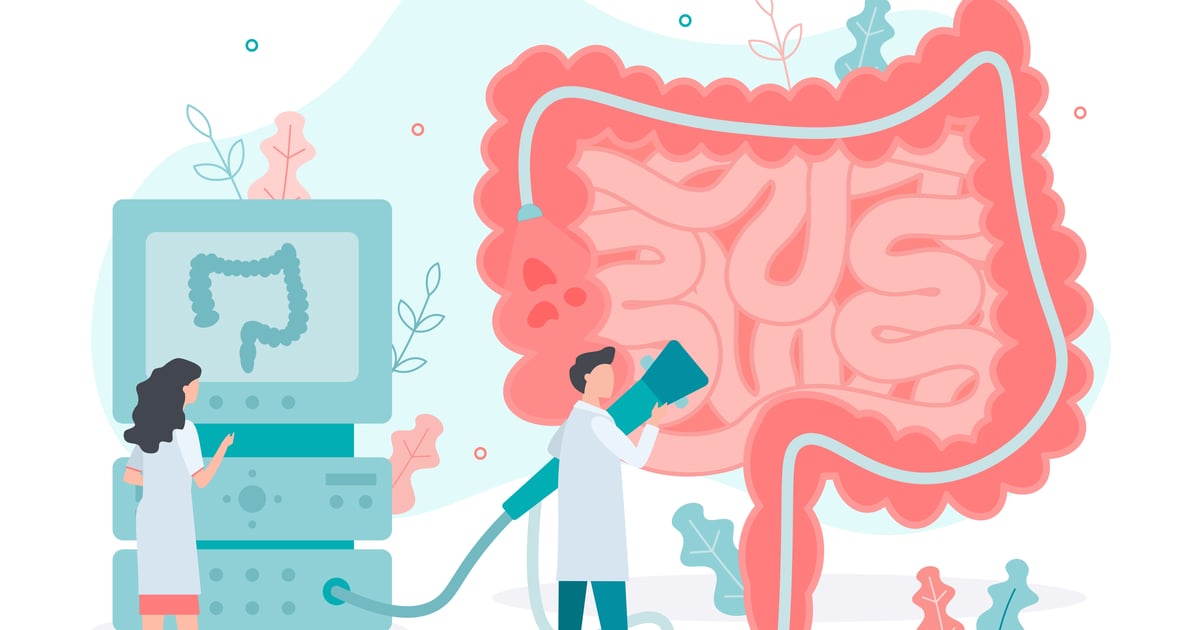 The word “colonoscopy” has always been one I have dreaded hearing. At 14, I was diagnosed by a gastroenterologist with irritable bowel syndrome (IBS), which causes stomach pain and other intestinal symptoms, like bloating and diarrhea. These symptoms tend to happen at the same time, which causes a lot of discomfort.

When I was diagnosed with IBS, I was given a prescription for fiber bars and sent on my way with the suggestion that my condition was brought on by stress (not surprising since I was in high school). I took an antidiarrheal medication when I could and eventually learned that changes in diet could help me immensely — which drove me toward vegetarianism and then veganism.

My IBS flare-ups (increases in symptom intensity) tend to come from environmental stress, or stress coupled with the wrong food choices. I’ve tried to control many of my symptoms (gas, bloating, diarrhea, fatigue, and headaches) through special diets like veganism, but the flare-ups ended up coming back at the start of the pandemic in a way I hadn’t experienced in years.

Here I thought I had the tools to manage it this entire time, but similarly to when I fly on planes — and experience having to run to the bathroom repeatedly from my nerves — the effects of the pandemic created additional unease and uncertainty, which made managing my IBS much tougher for me.

Due to the difficulty with my IBS symptoms, I ended up losing a significant amount of weight. I visited two different gastroenterologists with the hopes that they could assign me a new diet to help me gain some of my weight back and alleviate some of my symptoms. I wasn’t happy with either of them because they each advised me to get a colonoscopy based on my father’s diagnosis of colon cancer in his 60s.

What angered me about their suggestion was that my father and I had led completely different lifestyles. My father lived a sedentary lifestyle, mostly eating things like baloney and white bread — a low-fiber and high-fat diet. Unrelated, he unfortunately developed multiple sclerosis (MS) in his 30s. I, on the other hand, was active all my life and also worked exceptionally hard at eating well and generally taking good care of myself.

That said, what hung over me was the knowledge that my father likely had undiagnosed IBS and that a lot of his GI symptoms, according to my mother, were similar to things I experienced over the years.

I ended up visiting a specialist, who was working with my gastroenterologist at the time, who had me schedule a colonoscopy and endoscopy (a procedure that uses a tube with a small camera to look at the upper part of the digestive system) as well as a CT scan (which uses X-rays and a computer to look at soft tissue) of my abdomen and pelvis to rule out the possibility of colon cancer.

Instead of feeling a sense of relief, however, I left her office feeling frustrated and upset. I didn’t want to undergo a colonoscopy, because it seemed like an exceptionally invasive procedure, and I certainly didn’t want to go through with the colon prep. I feared getting really sick from the colon prep process — which required drinking a prescribed liquid chased by an entire glass of water, the result of which is spending hours in the bathroom as your system cleanses itself.

Despite my doctor assuring me I would most likely have no issues, other than some discomfort from the colonoscopy, I strongly felt that I just needed some dietary modifications or another quick fix that would put my mind at ease.

However, a few days after that visit, I realized that I was fighting my internal fears and concerns over having a colonoscopy. My mother had gone through it several years ago and told me it was the worst thing she ever had to do (and she gave birth to three children!). My brother also recently underwent his and said the prep was horrible and he didn’t enjoy the experience at all.

As someone who is already underweight, fasting and taking laxatives in order to have this test seemed like a very bad idea. I talked excessively about how the final visit to a specialist didn’t hear me and was misdiagnosing me.

Yet when I gave some thought to it, no matter how I felt inside about the test, I knew that as a mother to a 2-year-old, I had to make the decision to face my fears and have this test done.

Chadwick Boseman’s death from colon cancer at my same age definitely shook me. I didn’t think someone as strong and bold as Boseman could be taken out by something like that. It reminded me that I had a duty to get this test done based on my family history and to take what the doctors were recommending as valuable and important advice.

Although I had pushed the test out a few months, I decided to move it up. I decided that I’d frankly worry more the longer I had to wait and that waiting could potentially put me in worse health if anything was going on. And the sooner I could know what was going on with my health, the better I would be as a mother to my daughter.

In September, I did it! And it was not nearly as bad as I thought. Honestly, I was surprised at how painless and easy the test was for me. The colon prep was no walk in the park, and drinking the prep solution — which leads to going to the bathroom all night long — is no one’s idea of a good time. But contrary to all the fears I had about not being able to handle it, I showed up lightly sedated on the day of the test and woke up in the recovery area just fine, with a hearty appetite and no serious flags from my GI doctor.

I’m so grateful not only for the positive outcome but also because I faced a very strong fear of getting this test done. I now feel encouraged to let others know the value in moving forward with getting their colonoscopy done.

It’s recommended that adults age 45 and older should get regular screenings for colon cancer. However, if you have a family history of colon cancer or feel that your IBS is becoming unmanageable, talk to your doctor about whether you need to get screened sooner.