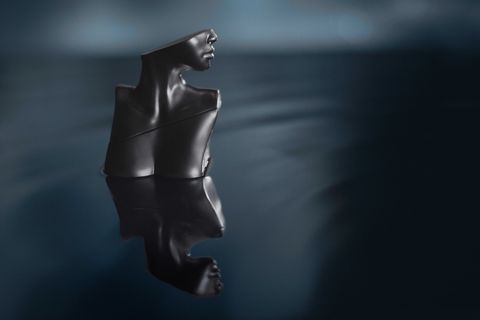 The fragrance party is not over for Billie Eilish. The singer just dropped her second perfume, Eilish No. 2—a scent inspired by rain, darkness, and all things eerie. In case you forgot, the 20-year-old star launched her first fragrance, Eilish, now lovingly called Eilish No. 1, back in November 2021.

Venturing into the world of fragrance was an exciting endeavor for the singer, who has synesthesia, a phenomenon in which one sense may impact another (her father and brother/collaborator, Finneas, also have it). For example, when hearing a song or smelling a certain scent, Eilish may see a color. “I just want to make so many,” she says when it comes to making new fragrances. So we’ll be here, patiently waiting for Eilish No. 3, No. 4., and beyond. Keep reading for more from Eilish.

Why did you want to create a second scent, and what were you hoping to evoke with this new fragrance?

Your second fragrance is always such a big deal. It’s a lot of pressure. I was really excited by the entire idea of it and fucking stoked out of my mind. I wanted to have Eilish No. 2, whatever it was gonna be, be very inspired by Eilish the original, and sort of like a yin and yang. Not even the opposite, but just, like, a very, very different version of it. Eilish is very warm and sweet. It’s heavy, it’s really cozy. And [with] Eilish No. 2, I wanted [it] to feel kind of eerie and darker and mysterious and wet. I really wanted it to feel like rain and water and woods and trees and spices. I knew I wanted it to be wet-inspired, and kind of spicy.

How did you describe your idea to the fragrance lab at the beginning of the development process?

Even at the beginning, I knew that I wanted the water world—that was big, creatively. I was like, “Water, water, water.” It has to be rain, water, and darkness, and blah, blah, blah. “Let’s try it out! Let’s try a bunch of things out that are inspired by Eilish, but that feel spicy and a little bit more gender neutral and not really as feminine as Eilish.” I don’t feel that Eilish was super feminine, but I wanted it even less feminine than that. With Eilish, I wanted to make it so that anyone could wear it. But even more so with this one. I wanted it to be a different sibling to Eilish and just feel like the darker, more sultry sibling.

If Eilish No. 2 was one of your songs, which one would it be?

Do you have a song that you think goes with the original Eilish?

In terms of the way that it feels, I have a song called “Listen Before I Go.” It’s very depressing, but the color of the song feels very warm and has amber-y tones, which feels like Eilish. If we’re talking about the way the lyrics work, maybe the songs I have called “Halley’s Comet” or “I Love You” work with the warmth and the coziness of Eilish.

Was there a particular scent that you remember from growing up that inspired you to make Eilish No. 2?

Eilish No. 2 is more like my recent years. One thing from my childhood that inspired this one was that I’ve always loved the smell of a Christmas tree farm and the smell of the wood and the pine needles, and the sap has always really been a sentimental and amazing scent for me. This fragrance really reminds me of being at a Christmas tree farm with my family. I don’t think Eilish No. 2 smells like Christmas, but it has this feeling to it that just really reminds me of that woodsy family feeling.

Eilish No. 2 will be available to shop at billieeilishfragrances.com in mid-November.

Emily Burns is the assistant beauty editor at ELLE Magazine. When she’s not writing, she’s probably drinking an Aperol spritz and cuddling with her cat Wednesday….or scheming how to date Pete Davidson.

How Larroudé Became the It-Girl Shoe Brand of Instagram
Do I Need to Invest In a Facial Steamer? Yes, You Do.
The Insider’s Guide to Holiday Style
Paris Hilton’s Guide to the Best Y2K Gifts
What Actually Happens During a Pap Smear?