“Wait, are we in trouble?” asked Amanda Seyfried.

Michael Kors was trying to get her onto the CFDA Awards’ iconic red carpet, which was really more of a silvery white, but we couldn’t stop talking about our workout songs (her: anything ’90s, me: the entire Dropout soundtrack, especially LCD Soundsystem) and kind of jammed up the entire line of celebs waiting to pose. (Sorry!) Seyfried wore a black runway stunner from Kors’ latest collection, along with deep red lipstick—but a much cooler, more balanced shade than Elizabeth Holmes’ red lipstick, the recent Emmy winner was quick to point out. (Seyfried says it’s this one, in case you want to try it out.) 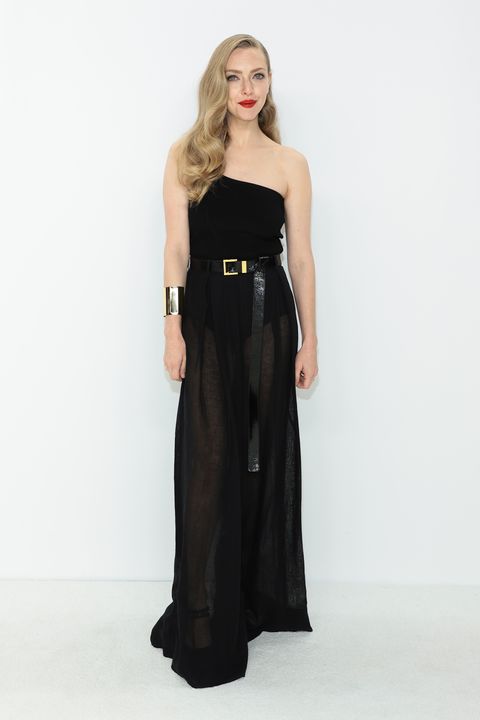 Among those waiting for their flashbulb moment at Cipriani South Street were SNL star Heidi Gardner and surfwear mogul Cynthia Rowley, who confessed to doing Jello shots en route, and Martha Stewart, who asked Julia Fox for a selfie. (“I shook,” Fox admitted while lighting a “really excellent, extremely pleasant” marijuana cigarette from Edie Parker Flower. “Died, really. She’s everything.”) Nearby, model and artist Richie Shazam posed (hypnotically, TBH) in Luar. “Fashion is a real love language in New York,” she said, “So when someone gives you an item of clothing, it’s not just a gift—it’s a real sign of true affection and trust. So for me, the CFDAs are like a love letter from all of us.”

Regina Hall confirmed the vibes were real. “I’m not sure how it happened, but somehow, when I met Jason Wu, I found a designer who could dress my body and I found a great human being who I really admire. That’s a rare kind of partnership, and the older I get, the more I understand that when it comes into your life, you grab onto it.” Across the room, Kim Kardashian (in Dolce & Gabbana “But with Skims underneath!”) grabbed onto Khloé Kardashian (in liquid bronze LaQuan Smith) while Janelle Monaé held fast to her Thom Browne puppy purse. 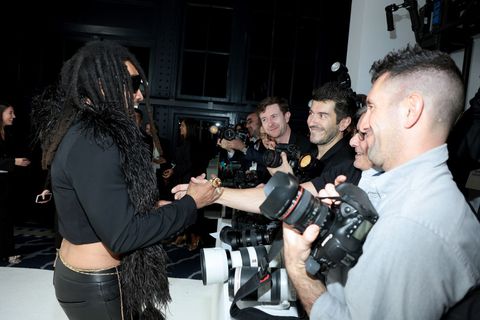 But CFDA nominee Jerry Lorenzo of Fear of God (which we love, love, love) took a more straightforward approach to emotional support during the “Fashion Oscars.” He wore a signature black hoodie and sweat pant from his collection (“I like to have comfort when things are crazy”) and brought his 12-year-old son, Jerry Manuel III, age 12. “I want to show him what I’m doing when he’s playing flag football and I can’t always be there,” said Lorenzo. “And I want him to see that there’s room for so many different people in this industry, and that by showing our designs, we’re using our voices, and amplifying those voices… Also,” he smiled, “I see they have pizza.” (So did Jerry III, who took a moment between slices to speak with ELLE.com “I’m really happy to be here for my dad’s award,” he said. “I let him pick out my outfits sometimes; he’s cool about that and he knows a lot about fashion so I trust him… I think tonight, my bedtime is like 1 AM. But not really. I think I have to go home right after this, actually.”) 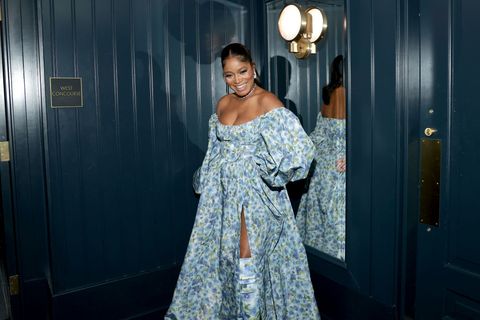 As the dinner bell rang, Addison Rae (in a vintage piece from Lily et Cie) did one more take for TikTok while Lenny Kravitz shook hands with the bartenders and a radiant Cher (in black leather Chrome Hearts) caused the entire Cipriani balcony to spasm en masse. As the bar declared last call, Keke Palmer and Mariska Hargitay had a momentary gown collision (Keke: Carolina Herrera floral, Hargitay: Christian Siriano, Both: Major.)

“I’m excited to see who the CFDA votes as the winners,” Siriano said, “But I’m way more excited for everyone to vote in the midterm [elections] tomorrow. You’re doing it, right? You’ve got to. Voting is always the coolest thing you can do.”

“Her beauty and her brain go not together.” —William Shakespeare